What are we playing for? Besides just for the sheer fun of the game, Arkansas Tap offers a lot for their players. During the session, teams are competing for points to earn the the High Point trophies.

All teams win money!  The top half of the highest finishing teams win 75% of the prize money.  The bottom half win 25%.  So it pays to play your best!  Arkansas Tap also pays for all of our captains yearly membership dues (after the 1st year), because we really appreciate all the hard work and dedication it takes to be a captain.

Currently we play in-house at Krome Billiards (North Little Rock ) on Mondays and/or Thursdays.  You can play on one night or both. You can start your own team or asked to be placed on a team. All skill levels are welcome. With our unique handicapping system every level of player has a chance to learn and win! 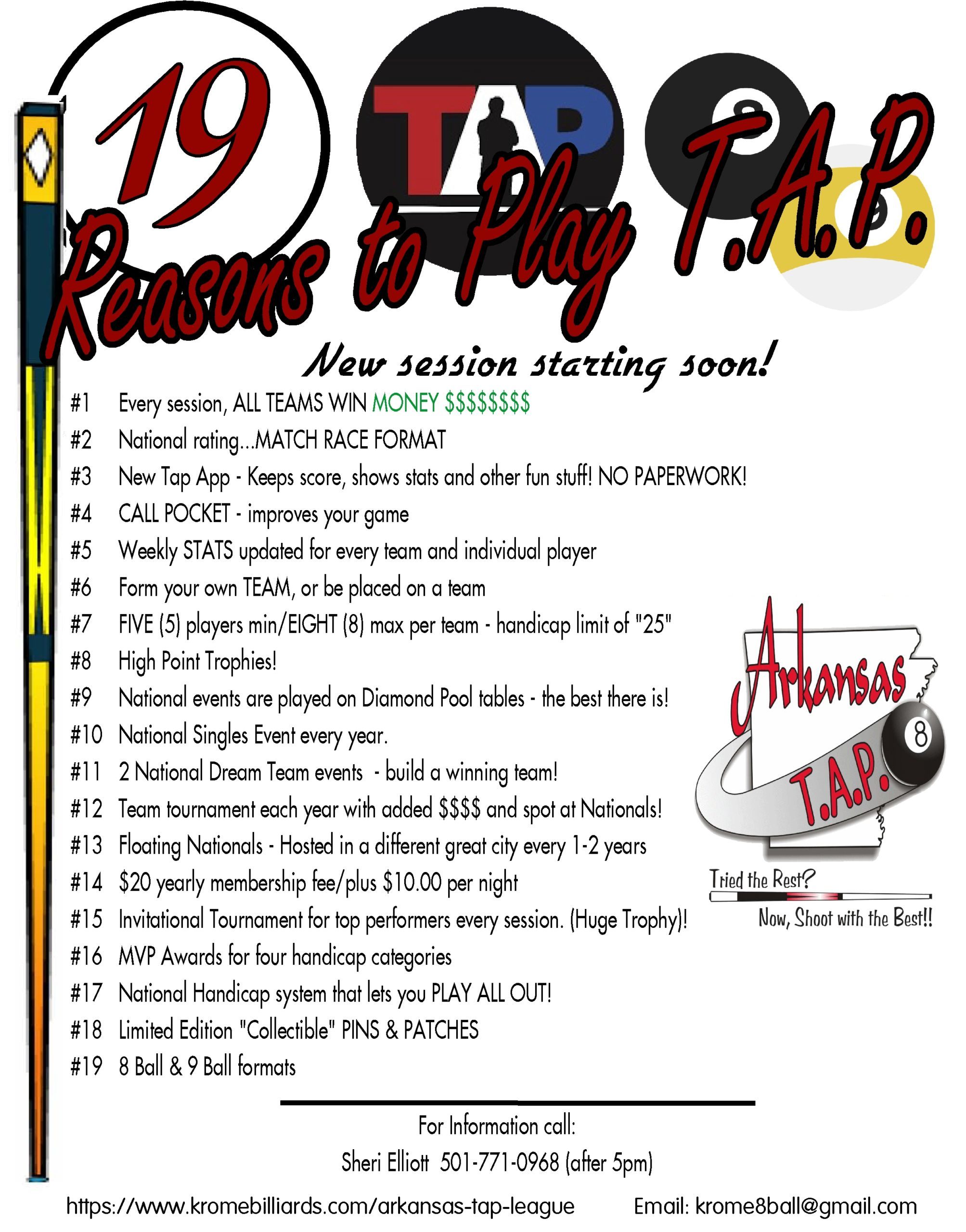 * MVP Program: We offer (4) MVP’s per Division: (2’s & 3’s), (4’s), ( 5’s), (6’s & 7’s). Each MVP receives a nice Arkansas Tap MVP T-shirt to commemorate their achievement . MVP is determined by match percentage and then adding the handicap of the players on matches won. The highest total is the winner. So it benefits you to continue to play the entire session and to not only play lower handicapped players. No MVP trophy will be awarded if the highest percentage is 50% or under. MVP trophies will only be awarded to the players with high integrity, regardless of scores.

M.V.P. Number. In the event of an exact tie, it will go by match percent, then game percent..

We also have a “BEAST” patch – that is awarded to a player that gets a Rackless, an 8 on the Break and a Break n Run in the same match!
Our newest Patch “The Lone Wolf” for the player that was the only one on the team that won and kept their team from getting swept!

Who's the best in Arkansas TAP? Who's the best in all of TAP League? Who has the most break and runs this year to date? Players can find this and more in PoolNet, our state of the art statistical reporting and handicap tool.

To see "Who's The Best," select the option on the left sidebar (no login required). Leave it set to "All Territories" or select it and find "Arkansas TAP" or whichever TAP league you want to view.

Uncheck USA and/or Canada if you wish.

The Start Date will default to one year prior to the date you are running the report. The Start Date cannot be any date before one year.

Select a handicap and "Submit" to see Who's the Best!!
Who's The Best 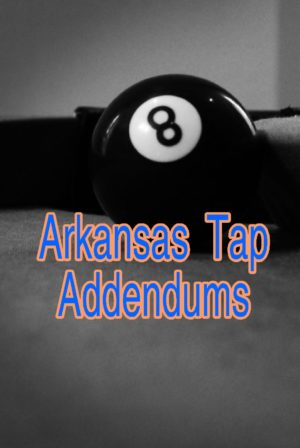 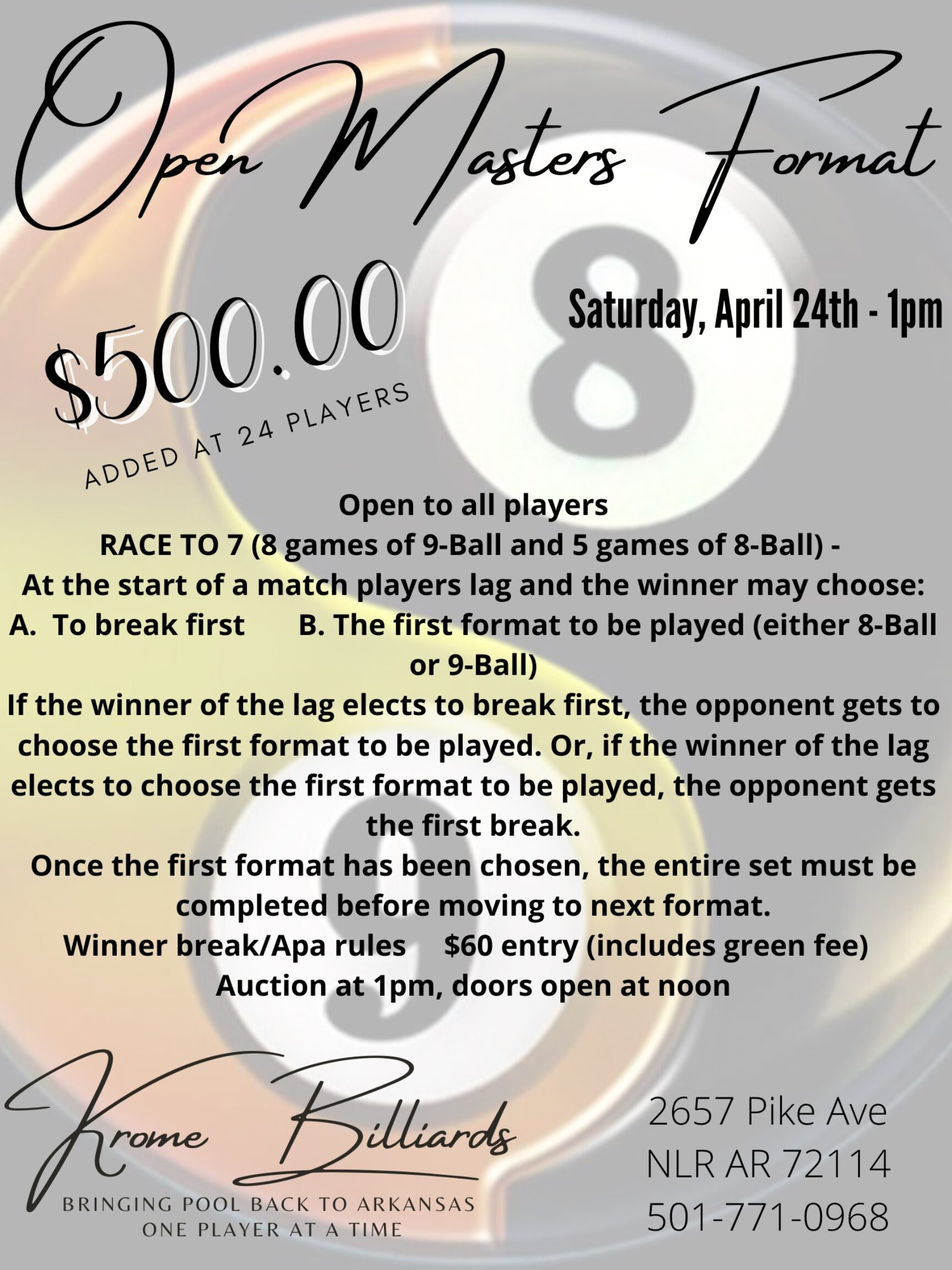